Devotees would often ask Sri Ramakrishna to enlighten them about the way illumined souls live. They would often express doubts as to how a person, who has attained the highest truth or Samadhi can come down and live in this world.

Sri Ramakrishna would explain this idea through a beautiful analogy. He would say that during the initial stages of sadhana, a person negates everything that is not of the nature of consciousness as not Brahman and proceeds further in his spiritual quest. This is similar to the ascent of a person trying to reach the top or roof of a house by using a staircase. He constantly negates that the steps are not the roof and keeps climbing further and further. At last he reaches the roof and enjoys the experience of being there for some time. But it is not possible to stay forever on the roof and he has to come down. 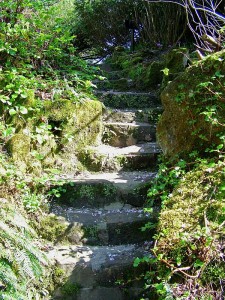 While coming down, he finds that the steps of the staircase, which he had negated as not being the roof, are made of the same materials such as bricks, mortar, etc as the roof. So he develops a new awareness whereby he does not negate anything, but affirms everything. In the same way, after negating all the experiences of the existential world as not being Brahman, a sadhaka ultimately attains the knowledge of non-dual Brahman. It is an extraordinary state of existence and he is in a state of great joy and peace. But then, his life in the world continues even after the knowledge of Brahman, but with a new sense of awareness. He no longer negates the manifested world as maya or illusory, but affirms that the same consciousness pervades through all that exists. Thus he learns to look up the manifested world with a new vision of affirmation. He experiences that the same consciousness, which he had experienced in the non-dual awareness, pervades in and through the entire existential world.